skip to main | skip to sidebar

And then, they took Daria off the air.

Don't ask me how my strange mind landed on the topic of Daria (perhaps some are not too upset because Daria had a cult-like following and fan-base), but I wish we had a cartoon satire that was comical, intellectual, and represented the teenage generation as well as this television show did.

The theme song randomly popped in my head, and when I put Daria in my away message, I was bombarded by a massive response. Thus, the blog post.

What do you remember about Daria? What did you like about it?

I will unload my thoughts and recent learnings on the program.

First, Daria was a spin-off of Beavis and Butthead. Daria was a minor character that had potential for her own show. Daria's cynicism and representation of a typical 90s teenager proved well at MTV who gave the green light to the pilot. I wish Jeannine Garofolo really did play the voice of Daria herself.

Daria was almost called The Esteemers. Good choice not to choose that.

Daria aired from 1997-2002, where Nogin picked up it and aired it for a while. Unfortunately, it only now airs in foreign countries like the UK, although I'm sure someone could purchase a bootleg copy of Daria's various seasons. Check out Daria's website if you are interested in recapping the memories of Lawndale High.

I will then make a list of reasons why I love Daria and why they should either put re-runs back on the air, or launch new episodes that focus on 1990s teenagers. The 2000s generation wouldn't really cut it:

1. Daria had the coolest single outfit, especially because none of it matched.

2. Trent was such a cool guy. Who wouldn't want to hang out with him?

3. Who else wouldn't want a best friend named Jane Lane who was incredibly amazing at artwork?

4. Daria lived in a bedroom with padded walls. Enough said.

5. The Morgendorffers portrayed suburban families to a T. Clueless. Hilarious.

6. Brittany and Kevin could not have satirized popular teenagers any better than they did, acting as head cheerleader and football captain.

7. Daria would always launch into these sophisticated rants that always confused the listener, but they were so true about life and our culture! Such wisdom...

8. They always made fun of popular music at the time, i.e. Will Smith's "Getting Jiggy with It."

9. Cartoon cameos never hurt anyone, especially if the writers were making fun of them as a pop icon. Otherwise, it was cool to see stars like Dave Grohl get incorporated into cartoon television.

10. The titles, that were puns, were always so witty and clever.

11. The end slideshow of characters dressed in obscene costumes always added an extra laugh at the end of the show.

12. Daria's favorite show, Sick Sad World, always depicted our culture in its true, natural, twisted state. How much more true is this now with reality TV?

13. They portrayed wacky teachers in an eerily accurate light, like Dr. Demartino with the bulging out eyes. Ah!

14. Quinn and Daria couldn't be farther from one another. Isn't that true with a lot of siblings? Quinn was so embarassed of Daria too, who always pushed her farther in order to embarass her more. Amazing sister.

15. We all loved that high school band that we thought would make it big but never would. Daria had Mystik Spiral. Trent, of course, made the band irresistible.

16. The love triangle between Tom, Daria, and Jane was so realistic, even though it was painful to watch, it portrayed teenage reality all too well.

17. We all had a gross nerd in high school like Upchuck. Unforunately, geeks like Upchuck are going to be richer than us someday. Sad but true, or sick sad world?

18. The Fashion Club, Quinn's popular clique of four, really showed how important cliques and popularity are to teenagers. In reality, they're not really all that smart, are they? At least it made us on the outside feel justified.

19. Didn't someone always have a crush on the older sibling? Daria was definitely victim to this misfortune with Trent...

20. Jamie, Joey, and Jeffy, Quinn's following boys, really showed how far boys will go for a girl's attention, yet the writers cleverly crafted their names to symbollically represent how similar they all really are with their near-identical names.

Did I miss any good ones? Care to add any?

Please respond to Daria. She has been neglected far too long from being cancelled. Something needs to be done to bring her back. To anyone who may find this:

haha! thank you for the wonderful recap of amazing daria features. i had only seen the show once (i've never watched much television) but recently some friends and co-workers agreed that i have a voice just like daria's best friend, and the things i say remind them of daria. all i do remember is her excellent sarcasm, so i went looking for pictures, episodes, etc. unfortunately i can't watch episodes on my retro DIAL UP internet, but i know they're out there somewhere...perhaps i will order some online.
this was interesting and i think you should rally other 80's babies to bring back their favorite teen tv show.

I was a little too young to watch Daria when it was initially around, but its brilliance cannot be argued. There are certainly no shows that represent my generation that well. I was never a fan of the Tom stuff too much, but that's just my anti-romance-crap personality, and the way it was handled *was* very realistic, if out of place for what was supposedly a comedy series. Amazing series. Fond memories.

If you enjoyed the show, could you please sign the petition for a DVD release?

Loved this blog entry. I've linked to it from my blog, the Daria Fandom Blog II, at:

holy crap...you posted this exactly a year ago...i was just searching for pics of daria and her cohorts from the end credits and read this. me and my friends love daria and are always talking about how we wish it were back on tv or released on dvds...this just made me smile

Hey, I know like no ones commented on this in months but I've just hit a surge of Daria downloading and caught this blog.
I wasn't a teen when this show was aired, but I watched it anyway when I was about 10 and loved the girl.
And I spent much of my teen life basically - minus the negativity - living her life through school.
One decent friend, [unfortunately no hot sibling], not popular but always resorted to for smart remarks and advice by annoying pops and tbf, I was a smart ass too.
And only over the last few months have I been yearning to see the famous 'brain' again. I've been watching her and not been able to do much else, with a grin on my face or laughing out loud. They were beautiful to watch and I related so much to her side of the story.

I love Daria. I love Jane Lane - I had her hair for like a year but in purple lol. And lord I love Trent - musical loosers = big turn on haha.
Thanks for the blog, it made me smile, and through the list I was just nodding and giggling away.

Nice, Just came accross this looking for daria pictures for my myspace. I found the whole thing online Somebody is selling a bootleg copy of every episode on iOffer.com. Be nice if they did bring it back for college years. The ending wasnt all that great. Or atleast have a movie for the LHS class of 02 reunion.

Daria was THE coolest cartoon show ever (and this said from someone approaching the wrong side of 40).

Sharply cynical, witty and edgy - I enjoyed every wry minute of it, and miss it dreadfully.

I definitely live for the day it is brought back to life.

Just a week ago, I was skipping through my iTunes and I heard You're Standing On My Neck. All the memories from watching Daria, my hero from back then, rushed back in and I hunted down all the episodes online. I was lucky enough to find all five seasons and both tv movies on youtube.
Seeing as you're a fellow fan, here you go. I figure you'd want to watch them all.

That's a link to this individuals channel. Have fun. I know I have rewatching all the episodes.

my god you've said it perfectly!!
i loved daria! i bought the dvd set online and it turned out to be taped from tv. i got my money back but kept the dvds! beter than nothing!!

Cool article you got here. I'd like to read something more about that topic.
BTW check the design I've made myself A level escort

Just found this. Thanks for doing this--I've been rewatching Daria lately and agree. It would so never fly today, though. People like Val that Daria mocks are the ones making up all the MTV programming now.

my older sister was an 80's baby, and i remember her watching daria with her friend after school- i was probrably only 9 at the time. just recently, like most who have been posting here, i started watching daria randomly on a whim :) now that im older i can really appreciate how awesome the show is- thanks for an awesome post!

"1. Daria had the coolest single outfit, especially because none of it matched." who could resist her?

Nice story as for me. I'd like to read a bit more concerning that theme. Thank you for sharing that data.

It was very interesting for me to read that article. Thank you for it. I like such topics and everything connected to this matter. I definitely want to read a bit more soon. 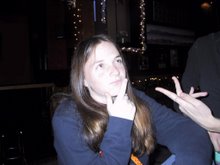